Ashoka's passion is inspiring people through public speaking and singing. He has served as a Master of Ceremonies at numerous festivals, including the Bhakti Fest of California, LoveLight Festival of Maryland, Boston Yoga Chant Fest, Omega Ecstatic Chant Fest of New York, Denver Chant Festival and Greater Portland Festival of Nations. He was a featured speaker at the Dale Carnegie International Convention in Washington DC and a keynote speaker at the Chaplaincy Institute of Maine graduation ceremony. He has shared his message in settings as diverse as primary schools, universities, national festivals, national conferences and churches. Ashoka is currently facilitating memorials and various gatherings online. 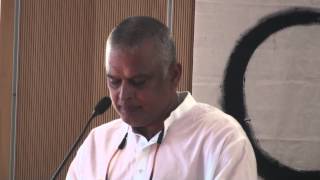 Your introduction of me was beautiful.

Every event is better when you are there. Love your spirit.

Your love for the service and community came through each of your words.

Beautiful introductions delivered in a mindful and caring way...It was a pleasure!"